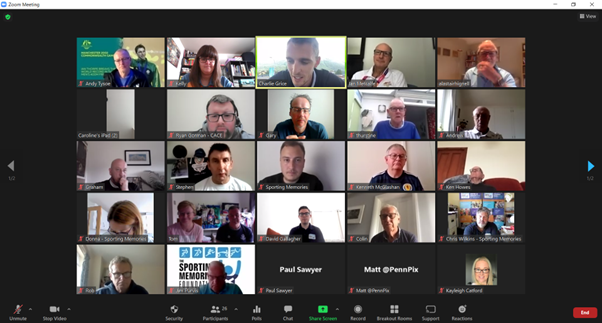 Ahead of the 22nd Commonwealth Games, taking place in Birmingham, we held a special online Get Together to celebrate the upcoming sporting festival with former champions and our own club members uniting to share memories.

Those four led the first part of the Get Together where they spoke to our club members about their experiences of Commonwealth Games of the past as well as the preparations and planning which have gone into delivering the upcoming games in Birmingham.

Yvonne and Charlie also shared insights into their Athletics career, and how they dealt with the challenge of injuries as well as acclimatising to different countries for competitions.

In the second part of the Get Together, it was the turn of our club members to share recollections of previous games and partake in a Commonwealth Games themed quiz – with the teams split into the Home Nations of England, Scotland and Wales. The Scottish team were crowned winners of the quiz much to the frustration of the other two competing nation teams!

To round-up a brilliant event which saw club members, facilitators and volunteers attend from across the three home nations, Lachie Stewart, who won gold for Scotland at the 1970 Games, had his first ever experience of the internet and Zoom by joining our online Get Together. Lachie shared his story of how he won that race in front of a raucous home crowd as well as answering questions from our club members who were in attendance.

A big thank you to everyone who made the Get Together so special and Sporting Memories would like to wish all the British teams the very best of luck at the Games!