A masterclass from a legend! – Graham Gooch joins us in Leyton 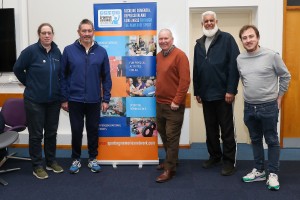 As part of our ongoing sessions alongside Essex Cricket in the Community, we were delighted to have England and Essex legend Graham Gooch share his knowledge and insights from his cricketing career with us at Sporting Memories.

Graham visited the Leyton Sports Hub in east London, where we host a weekly Sporting Memories club, for a special session that welcomed some cricket lovers from the local community.

The former England captain spoke in detail about how his career had started locally, playing schools and then regional cricket across Waltham Forest and west Essex, where he particularly referenced his application and dedication to fitness and training that he credits as one of the key factors in him building a successful first-class career that spanned over three decades.

Graham also reflected on his infamous 333 at Lord’s against India in 1990 and being part of an England one-day side that came close to winning the World Cups in 1987 and 1992. The audience, featuring some Sporting Memories club members also sought insight into the opener’s batting technique and his mentality and approach towards building an innings. 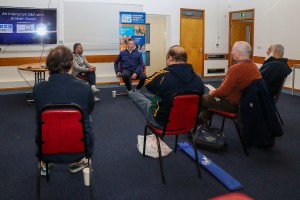 After the session, we caught up with Graham to reflect on what it means to him to share his tales from Cricket.

“Having played professional sport for a long, long time and having a lot of people help me on that journey, I think it’s good for me to share my experiences in return. If I can help people through my experiences to get more fun and enjoyment out of sport, or life in general, then that is something I am always happy to do – and I was glad to be part of this session with Sporting Memories.”

Graham also reflected on the recent passing of Australian greats Rod Marsh and Shane Warne and spoke about what it was like to face them on the pitch as well their personalities away from the boundary.

“I thought they were both characters that are naturally associated with Australian cricketers - They were driven, very tough competitors on the field, but always fair and proud to wear the Baggy Green cap. Alongside that they were very sociable off the field and would happily chat to you and share their thoughts about the game now and where they saw the future of cricket.

“My first memories of Rod (Marsh) are of him being heavily involved in my Test debut – caught Marsh bowled Walker, caught Marsh bowled Thompson! I got to know Rod quite well over the years as he came over to be the director of our (England) Academy. He was a great bloke as well as being an iconic cricketer for Australia.

“With Shane it was very similar as well, he was a lovely bloke. I didn’t know much about Shane when he came over to England, but soon found out as I was at the other end of that ‘Ball of the Century’ to Mike (Gatting)!

“Shane was a great showman, he was a guy who was a great competitor as well as a great technician who lit up the game of cricket. He made the sport exciting in the early 1990s by the way he played the game, his skills and he was a beacon of the game.

“We’re all in the family of cricket and it’s a huge loss for our game that two great people have left us too early.”

For those interested in attending our weekly sessions at Leyton Sports Hub, please contact Arfan Akram at Essex in the Community via arfan.akram@essexcricket.org.uk.

Thank you to Nick Wood | Unshaken Photography for the images used in this article.