An evening to remember! – Scottish Volunteers honoured at inaugural Awards 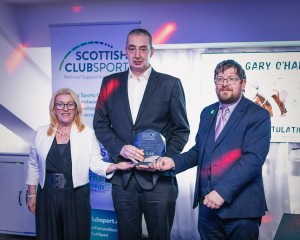 Headline sponsored by Iron Mountain EMEA, volunteers from our clubs across Scotland gathered at the Tony Macaroni Arena, home of Livingston FC, to celebrate their efforts in keeping our clubs smoothly running across the nation, and the support they offer our members locally in their communities.

Our audience were welcomed to the event by evening compere and Sporting Memories Ambassador Stephen Halkett as he shared stories of his childhood supporting Clydebank as well as his involvement in our intergenerational club at Vale of Leven Academy.

It was then time for the first award of the evening, the Zoom Maestro Award supported by Scottish ClubSport, which was handed out to Graeme and Joanne Hewit who were recognised for their brilliant efforts to keep their club going online during the pandemic.

Shortly after the Quiz Master Award sponsored by BEAR Scotland, was awarded to Gordon Handy – a volunteer who has been involved with numerous in-person and digital clubs over the past two years, with his quizzing efforts keeping members and colleagues entertained.

The following accolade was the Dedicated Service to Volunteering Award supported by Age Scotland, which honoured one of our volunteers that has been helping the charity for over two years – the winner of this award was Andrew Ferguson from our club in Longniddry!

There was then a short break in the dishing out of awards as the audience were enthralled by stories from none other than Livingston legend Jim Leishman. Jim, who is currently the Lord Provost of Fife, recalled memories of his time in football from his playing career curtailed by injury to recollecting his successful time at Livi where he guided them from lower league football to Europe, across a nine-year spell at the club as manager.

Following Jim’s inspirational recollection of his football career, the final two awards of the evening were handed out. Gary O’Hare was acknowledged by his fellow volunteers as he received the Volunteer’s Volunteer Award, supported by tide (together in dementia everyday).

Finally, the main accolade of the evening, The Outstanding Volunteer Award, supported by Headline Sponsors Iron Mountain EMEA, was given to Peter Jack for his brilliant efforts with our club in Dalkeith as well as his support for our digital clubs and events during the pandemic.

After a brilliant evening, it was left to Donna Mackey, Partnerships Manager, to reflect on the inaugural awards: “This was a brilliant occasion for everyone involved with Sporting Memories Foundation Scotland and we were delighted to recognise all the hard work our volunteers do through this award ceremony.

“Without their time and effort we simply wouldn’t be able to run our clubs across Scotland so it was great we could unite everyone and celebrate their achievements with us. A huge thanks must also go to all of our sponsors, Iron Mountain EMEA, Age Scotland, BEAR Scotland, Scottish ClubSport and tide who made the evening possible.”

A big thanks to Aye Spy Photography for the image and capturing our awards evening.