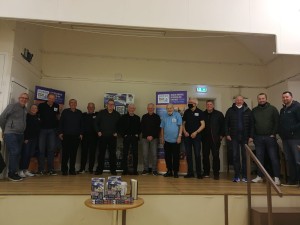 Sporting Memories Scotland were delighted to welcome former Wolves, Southampton and Scotland midfielder Jim McCalliog to our club in Blantyre earlier this month (9 March) as he shared stories of 16-year playing career across two continents!

Jim was in fantastic form as he gave an insight into his life through anecdotes and tales from the game with the members of the Blantyre Sporting Memories club as part of a tour for his recent auto-biography ‘Wembley Wins, Wembley Woes’.

Joined by his wife Debra, Jim shared some fantastic tales of his career including how he was given a signing on fee of £9,000 when he signed for Leeds United in 1963 as a 15-year-old amateur. The fee was a huge sum in the 1960s and meant he could move his family down to England with him – despite only being at Leeds for just four months before joining Chelsea!

Jim also referenced some of the highlights of his career including scoring for Sheffield Wednesday in the 1966 FA Cup Final – a thriller which Wednesday lost despite being 2-0 up against Everton with over an hour played, earning his first international cap for Scotland in the Tartan Army’s famous win at Wembley in 1967, playing alongside Derek Dougan at Wolves and finally winning the FA Cup with Southampton in 1976.

The audience were enthralled by Jim as he also detailed his time playing in the North American Soccer League with Chicago Sting and recalling times spent with the likes of Denis Law, George Best and infamously one night with Rod Stewart at his house thanks to Manchester United team-mate Willie Morgan.

Jim then took time to answer questions as well as sign copies of his autobiography for the audience.

Speaking after the session, Yvonne Friel, Group Delivery and Practice Co-Ordinator for Sporting Memories Scotland, was delighted Jim came to the club in Blantyre to share his recollection from a successful career.

“It was brilliant to have Jim with us here at Sporting Memories. He has attended Zoom sessions previously during the covid pandemic, but it was fantastic to finally have him with us in-person and sharing his stories with a captivated audience.

“Speaking to our members after, they said they had a brilliant night and that is what Sporting Memories is all about – ensuring people have a positive experience whilst reminiscing about sport. We’re so grateful to Jim and we hope that he can join us again soon.”