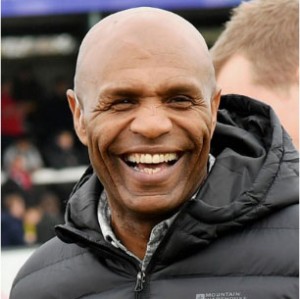 Sporting Memories Foundation is delighted to announce that our Patron Dr Luther Blissett DL has been awarded the honour of Officer of the Order of the British Empire (OBE) for his services to football and charity.

The former England striker has been involved as an advocate of the charity since 2017 and is passionate about its aims to support older people living with dementia, cognitive disorders, isolation and loneliness through sports based reminiscence. In his role as a Patron, Luther has been involved in many of our initiatives, including speaking at our annual conference, attending our Great Get Togethers and our partnership with the Professional Footballers Association.

In 2021, Luther was given the Freedom of the Borough of Watford. He was the first person to receive this accolade in 16 years and was given in recognition of Luther’s community work, particularly helping the town in becoming “dementia friendly”. Something which Luther continues to work towards, with Sporting Memories Foundation playing a key role in that ambition.

Luther was also awarded an Honorary Doctorate from the University of Hertfordshire, in recognition of his football career and his work in educating young people and the wider public to recognise and prevent discrimination and racial abuse. In the same year, Luther was made a Deputy Lieutenant of Hertfordshire.

Chris Wilkins, CEO of Sporting Memories, said: “On behalf of everyone associated with Sporting Memories we would like to congratulate our Patron Luther Blissett DL on being awarded an OBE in Her Majesty’s Birthday Honours.

“Luther has been a tireless campaigner of many just causes over the years, including being a brilliant champion of our work and supporting older people living with dementia or facing other challenges such as being isolated and lonely, so it is fantastic to see that he has been recognised with such a prestigious honour.”

Speaking upon receiving the award, Luther said: “The work I have done with Sporting Memories is something most humbling; dementia, isolation, the effects of a stroke are all things that can touch any one of us or our families. These things devastate lives, with an impact on not just those affected, but their loved ones too.

“The work that Sporting Memories does is incredible, empowering and encouraging people through reminiscence. That my career as a footballer can be used by the charity to touch the lives, not just of football fans, but their families and the community as a whole is in itself a great honour.

“To receive an OBE, not just for being a footballer, but using that career for the good of others makes me immeasurably proud, even more so in this Platinum Jubilee year.”