In living rooms and kitchens across the country, older adults who are most at risk from inactivity and loneliness have been using their Sporting Memories KITbags to keep moving every day.

Since the height of the pandemic, we have supported and encouraged hundreds of vulnerable adults to stretch their resistance bands, squeeze tight their stress balls and reach high with inflatable beach balls. And of course, do their all-important strength and balance exercises while the kettle is boiling. It sounds fun, doesn’t it?

For Scottish Women and Girls in Sport Week 2021, we wanted to celebrate the impact the KITbag has made not only to our female Sporting Memories members, but also to other Clubs and groups across Scotland who have benefited from additional funding received from the Scottish Government.

We want to share how the KITbag is being used and how it can provide opportunities for companionship and support to those that need it most. 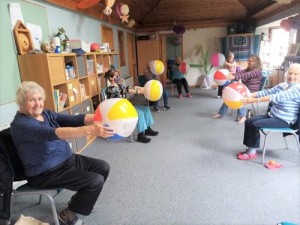 They were keen to support those most isolated on the islands through Covid and looked to the KITbags as a way of keeping people moving in their homes.

With activities returning to the Centre they now run a ‘Cuppa Routine’ session once per week for women who like to meet for some exercise, then a cuppa and a blether.

The Cuppa Routine is featured in our Exercise Guide along with other low impact, simple to follow exercises using the equipment provided in the bag.

‘It’s really helpful to exercise with others in a fun way. The exercises are easy to understand but still challenging.”

“I like the group exercising together, I feel better.”

“It’s a nice way to meet and exercise together, it’s good for the body and soul.”

It’s inspiring to know that the KITbag is being used to bring women together in a social setting and motivating them to be active together. This group of women have lots of fun with their exercises and many have seen the physical benefits of regular activity.

“I would just like to say thanks so much for the KITbags, they are a fantastic resource both for working on a one to one basis and when exercising as a group. We have noticed the improvement not only to physical health but also to our members mental health. There is no doubt that exercising boosts mood and general wellbeing, and even more so as we emerge from the pandemic when many were not exercising or engaging with others.”

Freda joined Kirkcaldy Sporting Memories in May 2019 and was very active prior to lockdown. In fact, she was crowned senior ladies’ bowls champion in 2019 at her local club, Beveridge Park. However, when facilities closed there was no outlet for Freda to maintain her activity levels and as a result became inactive most days. The introduction of the KITbag helped Freda to move a bit more once again whilst getting the support and encouragement from her peers at the weekly Zoom club.

We even saw from her logbook that Freda was using the equipment most days, particularly the stress ball which helped to relieve arthritic pain and improve her hand grip.

Freda says: “The KITbag has given me more confidence and I enjoy using it. I’ve noticed I’ve become more flexible!”

In fact, Freda’s confidence grew so much she agreed to play a starring role in our KITbag film.

Patricia’s story is different, as she is supported by South Lanarkshire Day Care Services as a service user. A wheelchair user, Patricia received at-home support from care staff during lockdown instead of her usual visits to the day care centre. Staff found it challenging to find any resources to engage people at home on a one-to-one basis, so the KITbags presented a great opportunity to support people even with the most complex of needs.

“I think the best thing about the contents is that they can be used even with some of our service users who have complex needs, and it is something different for us as staff to get stuck into.”

Patricia’s bedroom is upstairs, so she spends a lot of time alone. The care staff had to be quite creative in how they encouraged her to exercise.

“When care staff visited, they used the resistance band from the KITbag to do some exercises while singing ‘Row Your Boat’ as they went back and forth. This might not sound much but the care staff said it was the most animated and happy she has seen Patricia in weeks.”

This might seem a small example of how the equipment in the KITbags can be used, but it’s hugely impactful to a vulnerable woman who was affected by lockdown measures.

We have seen many positive physical, mental and social benefits of having the KITbag and our ambition is to bring the KITbag and our services to everyone across Scotland who will benefit. The Scottish Women and Girls in Sport Week is a timely reminder that no matter your stage in life that #SheCanSheWill and the KITbags can help to achieve your active goal.

We must thank our funders the Scottish Government, Scottish Power Foundation and Spirit of 2012 for helping us to make a difference and change lives.

Whether you are an organisation interested in purchasing Sporting Memories KITbags wherever you live in the UK, or an individual who would like to find out more, visit our KITbag page, where you will find more information and Freda’s film.