This week we are shining a spotlight on our network across Wales as past of our ‘Croeso Week’ and the important work the clubs across the country do to support older people.

Our work in Wales is possible through support from the first phase of the Healthy and Active Fund, a £5.4m Fund run in partnership by the Welsh Government, Sport Wales and Public Health Wales.

We caught up with Jane Clemence, who operates several of our clubs across Cardiff which started during the initial stages of the Coronavirus pandemic. Jane began by explaining how having to start online during the pandemic helped them build to eventually meeting face-to-face.

“We’d thought we had missed our opportunity to start the club when the lockdowns began, but in a way it actually worked out better as it gave us an opportunity to move online and meet people in an environment where they felt more comfortable. As you get older you get used to not meeting people, where as maybe being online took that fear away, which I think helped us at the start.

“The great news is that we’ve kept all of our original members and been able to add more on top of that as time has gone by.”

Jane felt one of the reasons the clubs have been successful during a challenging time is the united nature of the groups and how they have bonded over the past couple of years. 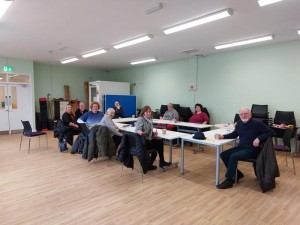 “It’s almost like being part of a sports team if I’m being honest; the members have such a wealth of knowledge of other sports – and also we have a wide range of ages who attend our clubs, starting from late 30s all the way up to the 90s – which is remarkable but we all feel part of the same team.

“There’s a real camaraderie and spirit amongst the group. Most of them didn’t know each other before they joined, but now I would say they are friends and often meet up outside of the sessions.

“That means a lot to me because a lot of the people we started off with would have been isolated and not had much to do, or many people to see during the week, so it’s nice they’ve been able to bond and do other things away from our sessions.”

Jane has been involved in the clubs since their formation and even those she had plans to take early retirement, but with the clubs starting to thrive Jane has changed her mind.

“For me, these clubs have been amazing. I have been involved in community projects for over 30 years and I’ve really enjoyed being part of this journey with the members. Seeing them go from being isolated to then having fun and laughs with people they now consider a second family is something special. They say they see the people in the clubs more than their own families, which kind of justifies why we run the clubs really.

“I was due to retire at the end of this month, but I have no intention of doing so and leaving the club because I enjoy it so much and I look forward to the weekly meetings to see how everyone is getting on.”

Finally, we asked Jane for her advice to anyone who would want to come along to one of her Sporting Memories clubs in Cardiff.

“My message is that ‘the kettle is always on’ – come along and try it if you’re interested, you can just sit there and have a cup of tea if you want, or you can get involved with that chat – it is entirely up to you. There is something for everyone!”

If you would like to find out more about our clubs across Wales, get in touch with Rob Baker, our Project Coordinator for the Healthy and Active Fund (HAF), here.