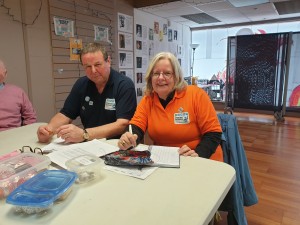 Ahead of our inaugural Scottish Volunteer Awards, being hosted at the home of Livingston FC on Thursday 28 April, we’re speaking to some of our amazing volunteers in Scotland that make our clubs possible.

Sponsored by Iron Mountain amongst others, the awards evening will celebrate the fantastic efforts and achievements of our volunteers who have gone above and beyond to keep our clubs running during the Covid-19 pandemic, but to also highlight how volunteers can make a difference to the lives of older people across Scotland.

We caught up with Graeme and Joanne Hewit, our only couple who partner together across Sporting Memories Scotland, to understand why they love being a part of our club as a duo.

It all started with Graeme getting involved with our club in Corstorphine because he didn’t want to attend a local gym!

“I was referred to a Gym in Thistle for some rehabilitation work – but I wasn’t a fan of Gyms in general, but in there I saw a poster for Ageing Well, where they were looking for some helpers, so I applied for that. From that I found out about a programme called Buddy Golf, and it was there where I found out about Sporting Memories.”

Joanne added: “I got involved a wee bit later as I was still working but then Covid came along which meant I retired a bit earlier than I was expecting to, and so I decided to join Graeme and support what he was doing at Sporting Memories and I’ve been doing it ever since. I really enjoy the sessions because it’s great to be able to chat with people about sport!” 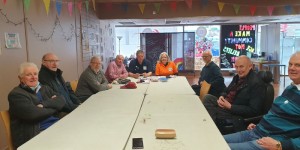 Since both Graeme and Joanne joined Sporting Memories as volunteers they have been involved in various clubs across Fife on Zoom. They shared what it has been like teaming up across the clubs and how their love of sport spread from home to the sessions.

“It’s been a learning curve” Graeme began. “When I was working, I was always on my own so I never been in charge of groups and meetings until I joined Sporting Memories, so I’ve had to learn that. But I just love talking sport, particularly Formula 1. Often Joanne and I will sit and watch the races and then have a chat about it, which we then bring to the sessions as a discussion point. By the time we’ve made it to the session we know what each other is thinking, so that puts us in a very unique position where we’ve already discussed it all week!”

Joanne added: “I’ll go to Musselburgh on Wednesday and then Graeme will join me later in that sessions, as well as the one we host on Thursday. I think we’re stronger when we do the sessions together because it is nice be with your partner and we also have the same interests in sport – the only thing we don’t know about is football! I really enjoy it and it’s something for us, which is great to do during the week.”

Ahead of the awards, Joanne offered a final line to encourage people to volunteer for Sporting Memories across Scotland and encouraged other couples to get involved as well as individuals.

“We have so much fun together and I would recommend anyone who is interested in setting up a club to go and speak to Donna as you will enjoy it so much, just like we do.”

Find out more about how you can volunteer for Sporting Memories here.