The Suffragette Derby of 1913 - Part Three

Peter Bloor has been delving into the archives to explore ‘The Suffragette Derby’. In the final part of this series, Peter reflects on the race itself, which was dubbed 'the greatest racing fiasco on record'.

THE SUFFRAGETTE DERBY OF 1913 - Part Three: The Race – “The greatest racing fiasco on record”

As the 1913 Derby field headed out of Tattenham Corner several jockeys turned round at what The Times called “the untoward occurrence” of Emily Davison darting out of the crowd and onto the track in what proved to be a fatal attempt to draw attention to the cause of women’s suffrage by, as it happened, interfering with the running of the King’s horse.

The leading group was well clear of this incident; out in front was Aboyeur, the 100 to 1 outsider considered by The Times Racing Correspondent as ‘one of the few not worth consideration’, but the other members of the group were far less surprising. Craganour, the favourite and the best three-year-old in the country according to The Observer’s Correspondent Sigma, was second, followed by Shogun, considered by some to be better able to stay The Derby distance than the favourite, then Day Comet and the inconsistent Louvois, who had beaten Craganour in the Two Thousand Guineas but then finished third behind him three weeks later in the Newmarket Stakes. 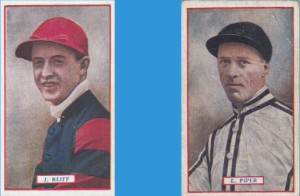 As the race progressed it was expected that Edwin Piper and Aboyeur would drop back, but he was still leading at the furlong post when Johnnie Reiff on Craganour decided that it was time they made their move. They got up to Aboyeur, running on the rails, but “as they neared the winning post Aboyeur seemed to be driving his rival diagonally to the middle of the course” as they fought out a finish so tight that Craganour only beat Aboyeur by a short head, with the fast-finishing Louvois third by a neck and Great Sport, Shogun and Day Comet very close behind.

The jockeys weighed-in, the “all right” flag was raised and some bookmakers began paying out when, despite Aboyeur’s owner Mr. Cunliffe not having objected, it became known that the Stewards had acted on their own initiative and disqualified Craganour “on the ground that he…did not keep a straight course and interfered with Shogun, Day Comet and Aboyeur, having bumped and bored the second horse”, Aboyeur, who was awarded the race. This was the first disqualification since 1844 - and that was for fraudulently running an over-age horse – making it, The Times said, “so serious and unprecedented an occurrence that without overwhelming evidence such action would surely never have been taken.”

The Times’ own correspondent had not reported any such evidence though, only that “There was some bumping, the responsibility for which it would be hard to apportion.” Sigma however felt no such difficulty, suggesting that the pre-race doubts around Craganour’s ability to stay the mile and 4 furlongs had been proved correct and that he “had run himself out trying to get in front of Aboyeur and swerved from exhaustion” with, it was also suggested, Reiff’s extreme form of the American style of riding, out of the saddle and lying almost along the horse’s neck, making it even more difficult to keep him running straight. 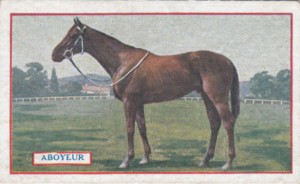 The Observer declared all of this to be “the greatest racing fiasco on record”, a fiasco that became a “Derby Sensation” three weeks later when a study of photographs showed Day Comet to have been so completely screened by the others in the extremely close finish that the Judge had missed him. The horse’s bandaged forelegs should still have been sufficient to identify him as having finished third or fourth though – not sixth – and as such he should have been placed second or third following Craganour’s disqualification, although there was no suggestion that anything could or should be done about this, which The Observer explained it had only made public in the belief that everything about “this amazing Derby” should be made so.

Mr. J. Davis of Hurst Park Racecourse disagreed though, and feeling that something should be done told an Observer representative that he was considering staging a race solely for the Derby horses that would decide the best three-year-old in the country, something the Derby – and Aboyeur’s victory – had failed to do. Little time had passed since the original race but the reaction of the owners of Craganour and Shogun had been positive, and it was thought the owner of Nimbus would also be keen to give his colt the chance to redeem his disappointing showing at Epsom. Nothing however was to come of the scheme, undermined as it was almost immediately by the sale of Craganour to The Argentine, a condition of sale being that he should not race again and one that ruined the prospect of all the more-fancied Derby horses meeting again in the St. Leger.

The damaging fires set by suffragettes in the stands at Hurst Park on the night of Emily Davison’s death cannot have helped either, but they are also a reminder that while a change to the jostling rule was made within a fortnight it would take another 12 months of militancy and fifteen years before the two Acts enfranchising all women were passed. Whether actions such as those of Emily Davison on June 4th 1913 advanced or delayed those Acts is debated, but she had certainly brought the matter to the most prominent public notice via “the most remarkable Derby ever run.”

The quotes and other information in this article are taken from The Times, The Observer and the Manchester Guardian of the time.