The Suffragette Derby of 1913 - Part Two

Peter Bloor has been delving into the archives to explore ‘The Suffragette Derby’. In the second part, Peter reflects on the jockey involved in the incident with Emily Davison, Herbert Jones.

THE SUFFRAGETTE DERBY OF 1913 - Part Two: The jockey, Herbert Jones

Recognising that two people had been involved in the incident after the suffragette Emily Davison had darted onto the track at Tattenham Corner in the 1913 Derby, the Manchester Guardian’s headline above its article on the race told of the “Jockey’s Narrow Escape.” The jockey in question was Herbert Jones riding the King’s horse Anmer, which was brought down and rolled with him underneath before dragging him some yards and springing up again. Anmer suffered no ill-effects, his trainer Richard Marsh expressing no concerns, although when the King presented him to the Canadian Government in 1916 for the breeding of horses for Army use The Observer did comment that “he never did anything of note afterwards.”

Herbert Jones did not escape injury though, and was carried bleeding to the Ambulance Room, where he was found to have concussion, a broken rib and an injured arm with cuts and bruises, but where he recovered both consciousness and sufficiently for reassuring reports to be given to the King and Queen before they left the course and later in London. The next day Jones returned home to Newmarket, “his face…very badly bruised and his left eye closed and discoloured”, where he told a Press Association representative that he felt much better but of the incident itself could only remember “that just as he came round Tattenham Corner a woman jumped from under the rails…and rushed out among the horses.” “She seemed to clutch at my horse” he continued, “and I felt it strike her”, but he remembered nothing else except the sensation of falling and then waking up “feeling very sore and very stiff” – and lucky. 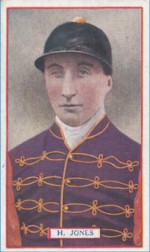 The Jury at the Davison inquest expressed its sympathy with him and their hopes for his speedy recovery, support that was altogether less appropriately expressed by occasional shouts of “Three cheers for the King’s Jockey” as her funeral procession passed on its way to King’s Cross Station. This desire to show support had not diminished by June 18th, when Herbert was “warmly congratulated on his escape when he came out in the Royal colours” to again ride Anmer in the Ascot Derby, in which even Herbert could only do so much with a moderate colt, the horse finishing fifth of seven runners despite “showing little sign of the effects of his Epsom misadventure.”

This had not happened to a jobbing jockey but to one who had won two Derbys, four Two Thousand Guineas, an Oaks and a St. Leger, and with them Flat Racing’s Triple Crown in 1900 on Diamond Jubilee, a foul-tempered and unpredictable animal that would only respond to Herbert, then a 19-year-old stable lad at Richard Marsh’s stables. In these unlikely circumstances Diamond Jubilee – and Herbert - went on to take the Triple Crown, winning The Two Thousand Guineas, the Derby and the St. Leger and, The Times noted, the Newmarket Stakes, something only two previous Triple Crown winners had done despite Diamond Jubilee having shown signs of what was described as “temper” in the paddock. Herbert had not simply struck lucky in 1900 either, for nine years later he came within one race of repeating his Triple Crown success, Minoru inexplicably finishing fourth in the last of the three races, the St. Leger. 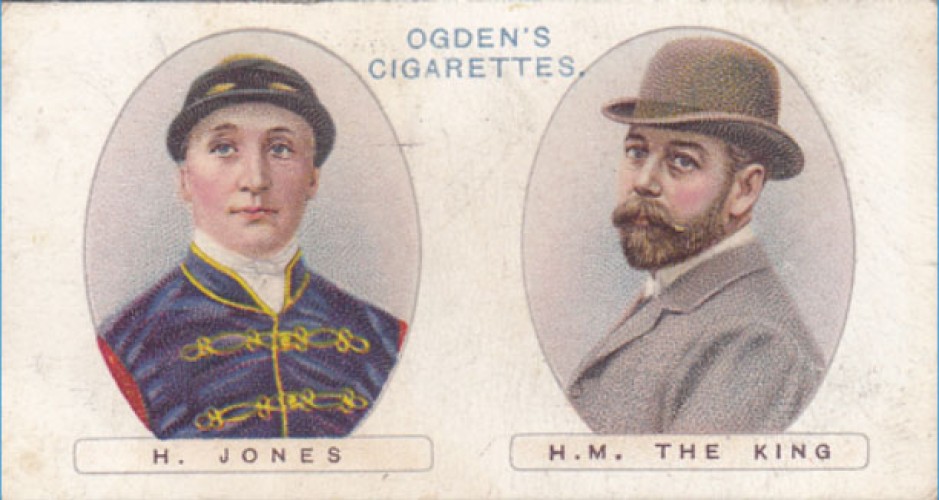 A fortnight after his experience at the 1913 Derby Herbert used his car to ferry those injured in a serious road accident to hospital in Newmarket, and in January 1920 had another narrow escape when he avoided an avalanche in Davos before digging out and saving the driver of his sledge, behind which he and his companion were walking. In 1930 though the misfortune was his when jewellery, including a gold watch presented to him by Edward VII, was stolen in a burglary at his sister-in-law’s house and not recovered. Twenty-one years later he committed suicide at the age of 70, the memory of the incident at Epsom playing little or no part according to his daughter Thelma, who wrote to The Times in 2013 wholly refuting any such inference and explaining that ‘what he never got over was the death at 34 of his adored wife …and the extreme deafness which…cut him off from the world.’

Herbert’s first trainer, the man who had given him his chance on Diamond Jubilee, wrote of him that “A better servant no man ever had, and a straighter or more honest jockey never got on a horse…”, while his obituary in The Times paid full tribute to his horsemanship, reminding its readers that he “was jockey to two kings and won two Derbys and other classic races for King Edward VII.” Any hope of a third Derby had, of course, ended with Herbert lying underneath his mount as the 1913 field galloped downhill and into the home straight, towards the finish and what The Observer termed “The Derby Fiasco” at the end of the race in which the lives of Emily Davison and Herbert Jones had come together so violently at Tattenham Corner.

The quotes and other information in this article are taken from The Times and Manchester Guardian of the time.