Volunteers Week 2022 is all about recognising the brilliant volunteers we have at Sporting Memories that help to keep our clubs running all across England, Scotland and Wales.

During the week we will shine a spotlight on some of our volunteers as they share their journey with us as well as explaining how their volunteering helps older people in their local communities who are either living with dementia, isolated and lonely, or looking for somewhere to share their passion of sport.

Recently we held our inaugural Scottish Volunteer Awards where we acknowledge the amazing efforts our volunteers have gone to across the nation. We caught up with Gary O’Hare and Andrew Ferguson, who both won awards on the evening.

Gary is one of our long-standing volunteers from East Kilbride and has been involved in the charity since 2017 and he believes it has helped him overcome challenges in his own life as well as supporting others.

“It means a great deal to me to be a part of the Sporting Memories team as such, because the opportunity to come along to the sessions came about after I had to leave my job due to issues around my mental wellbeing – I was dealing with anxiety and a lack of sleep – so I started off with Sporting Memories slowly but now I’m pretty much doing something every day which I enjoy a lot.

“I like helping people out – that’s what I’m all about but being part of Sporting Memories has given me self-value. On top of that it’s about seeing the value it brings out of those who come along as well. Personally I can’t imagine my life without Sporting Memories now. It’s what I’ve been doing for the past five years and it’s all I know at the moment.” 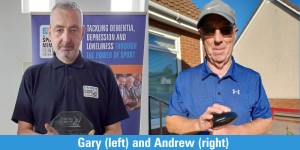 For Andrew, who volunteers our club in Longniddry, he gets to enjoy mixing his passion for sports as well as enjoying hearing people’s stories.

“I really enjoy being part of it because it’s an opportunity to talk about sport – and I enjoy most sports! One of the great things about volunteering is you meet people and you learn new things along the way. One example is one of the members in the groups I run once told a story about how he was a Chief Steward in motor racing and he had to disqualify Sir Jackie Stewart from a race!

“People have such wonderful stories to share with you and sometimes all it takes is to open up a forum, like we do, where everyone is sitting in a group and just having a chat about a topic like motorsport.”

Gary and Andrew received the Volunteer’s Volunteer and Dedicated Service awards at respectively. Gary was surprised to be chosen by his fellow volunteers for his award.

“I was shocked when I was told I had won the award – I kind of froze for a minute in disbelief. It was really lovely to be recognised by my peers and that made the award all the more nicer because it means they’ve acknowledged what you’ve been doing when you have worked alongside them.”

For Andrew, he was equally shocked and thrilled to be acknowledge for his efforts with his club based in East Lothian.

“I felt quite humbled by winning the award to be honest. I think volunteering for Sporting Memories can be an education for you, as well as the people you’re supporting at the clubs, but it can be so rewarding to see them when they come out of their shells and start talking about moments in their life and what sport means to them.”