Volunteers Week 2022 is all about recognising the brilliant volunteers we have at Sporting Memories that help to keep our clubs running all across England, Scotland and Wales.

During the week we will shine a spotlight on some of our volunteers as they share their journey with us as well as explaining how their volunteering helps older people in their local communities who are either living with dementia, isolated and lonely, or looking for somewhere to share their passion of sport.

In our first piece, we speak with two volunteers who support our clubs run through a social license with Sussex County Cricket Club. Thurstine Basset helps to run our club in Brighton, whilst Trevor Fuggle facilitates our club in Polegate. We caught up with both of them to share their volunteering experience with us, and they started by explaining how they became volunteers.

Trevor started by explaining how he got involved at our Polegate club: “The club started in 2020 and I saw a flyer about it and decided to go along to the second or third ever session and at that time it had one other member alongside me I remember! As time has gone on the club has grown, and at one stage we’ve had up to 20 members – which has shown the interest in the club locally.

“After being at the club for about seven or eight months, there was a need for more volunteers to help run the club, so I put myself forward and went through the training and have taken it from there.” 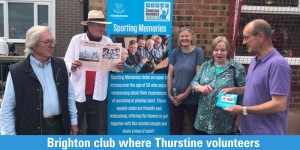 Thurstine referenced his own personal background and experience around dementia, that helped him join the charity as a volunteer.

“I’ve worked in mental health for a large part of my career and also my Mother and Father lived with dementia, so I know how it affects people personally – as I had to become a carer for my parents.

“I have also been involved in research looking into dementia down here in Brighton, where a lot of people with lived experience gave their insight into the condition. I ended up becoming a trainer in mental health during my career, so those experiences have certainly helped me to support our club”

Both detailed how their respective club members have added great value to the sessions they run. Trevor explained how the first person to attend the Polegate club had a brilliant sporting history along with others.

“We’ve had some brilliant members over the years who have been kind enough to share their stories. Our original member Guy, played for Corinthian Casuals and featured in the FA Amateur Cup Final in 1956 – he used to come along every week with his wife until he sadly passed away last year. His grandson, Ben (Chilwell), now plays for Chelsea and England.

“We also had a former Paralympian who won a silver medal at the inaugural Games and currently we have someone who was a national tug-of-war Champion – so we’ve had a wonderful variety of people that has enriched the club no end. I’ve always tried to keep in touch with previous members and their families, just to see how they are and also keep them updated on the club.”

Thurstine added how having the support of Patron, Alastair Hignell, at the group in Brighton has helped to make the club enjoyable for members.

“We’re a mixed bag of people as a group, we have those living with dementia, those facing challenges such as isolation and loneliness and in some cases club members who have mobility issues.

“Also Alastair offers a unique experience, where he has played rugby for England and cricket for Gloucestershire – and for example has faced the likes of Michael Holding and Joel Garner – so when members speak about cricket he can give a great insight into what it was like in those days!” 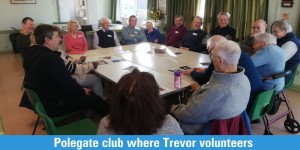 We asked both volunteers for their pieces of advice for people interested in joining Sporting Memories as a volunteer.

Trevor began: “I think volunteering for Sporting Memories is great and it’s a fantastic way for you to impart your insight and knowledge whilst sharing their memories from times gone by.

And Thurstine added: “I would say just join in and see how it goes – it’s about having time and space to be a volunteer for Sporting Memories and if you’ve got that it’s something I would urge you to do.”

Both volunteers are also very appreciative of the support given to them by Sussex Cricket to help them run their clubs across the county, with Thurstine acknowledging their efforts.

“We’ve had excellent support from Sussex Cricket, particularly Emma Brooke, who has been helpful in getting us to set up the group initially as well as paying for the venue we use - so we’re incredibly grateful to them for that.”